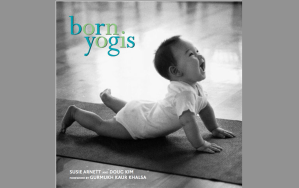 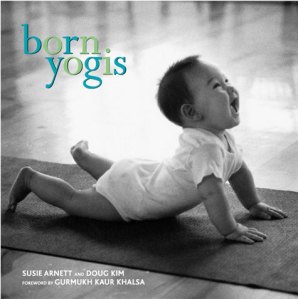 “The yoga market is completely saturated,” the literary agent said over the phone.  He had just taken a look at my book proposal for a coffee table book filled with pictures of babies doing yoga.  The pictures that my partner, Doug, had taken were charming.  There was no doubt about it.  I reminded myself that even Casablanca was repeatedly rejected before it sold.

The idea came to me about 8 months before that phone call.  My 7-month-old was learning how to crawl and spent most of his day in Cobra pose.  And when I looked around at my friends’ children, they were also doing yoga poses that varied depending on their stage of development.  It was true.  We are born yogis!

I called my friend, Doug, who had taken pictures of our family weeks after my son had been born.  The sweetness of his photography convinced me that he was the perfect partner for this project.  I pitched him the idea and ever open, he said, “Sure.”  It was all I needed.

Within a week, I had organized a test day where we would shoot 6 kids.  Doug came out to our home and we traveled from house to house in the neighborhood and Doug took pictures.  They say that babies and puppies are the toughest models and Doug found this to be true.  Some wanted a nap, some cried the whole time, one alternately cried and squinted under the hot, California sun as we waited for him to do down dog, something his mother assured us he “always” did.  Not that day!

My son came through for us.  When we got the proofs, Doug had captured a perfect picture of him in Cobra pose.  As soon as I saw that picture, I knew the idea would work.  Doug and I decided to go for it.  We would need 5 “rock star” pictures for a proposal to sell the idea.  We started shooting.  Everyone I knew and all the babies Doug ran across at the mall became test models.  At first, I thought every picture should be taken at a yoga studio.  But Doug insisted that no.  It would get boring.  Break it up, shoot some in homes, let’s see if I can catch the pose in the middle of their day, in bed, on the floor, in the yard.  He was absolutely right.

Having never been to a yoga class, Doug didn’t know the poses at first so I’d point them out if a child did it.  “Down Dog, now!” I’d yell and Doug would shoot and shoot.  Pretty quickly, he caught on and can now be spotted working up a sweat at Golden Bridge Yoga Studio in Los Angeles.

The proposal took about 7 months to create.  There was all the time shooting to get the perfect handful of pictures.  I come from television and in that business, a proposal is an approximation of an idea but in publishing, the proposal needs to be perfect.  What is in the proposal should be the best of the book you’re pitching.  And ours was beautiful.  We spent a lot of money on it, too.  We got a graphic designer and spent almost $1000 on 5 copies which included 3 of our top pictures plus text, Doug and my bio, and a query letter which is a one page overview of the concept plus demographic information.  So when the agent, a friend, gave us this hopeless assessment, we were upset.  “I’ll try,” he said and generously sent it out to Random House and a few other top publishers.  They all rejected the idea.  The yoga market was saturated, they agreed.

Doug and I went back and forth, debating the benefits of self-publishing or just walking away.  On a whim, I sent our proposal to a friend in NYC who was a publicist at Simon & Schuster and she happened to know the editor at Rodale Press, the top independent publisher with a focus on health.  A couple of months had passed since we began sending the proposal out and we were losing steam.  My family and I went to Ireland for a month and during that trip, I had decided to walk away.  We didn’t have the money to self-publish at that point and that was it.

When we got back home from this trip, there was a message on the answering machine from the editor from Rodale Press.  I called her NY number immediately.  Although I was exhausted from jet lag, I had to know.  She said the magic words, “We want to publish your book.”  If I wasn’t on the phone with her, I would have squealed and done cartwheels across the living room.  We had sold the book.  We made a deal with her within a couple of weeks and went into production on the book immediately.

Although other books had come out about doing yoga with babies, nobody had gone the coffee table book route.  Also, although some had published calendars with pictures of children doing yoga, nobody had tried to photograph babies and neither did any of the other products have the quality level we did in our pictures.

Compared to other books, our experience of selling the book was very quick and easy. From the day of our first shoot to selling the book was approximately a year.  I attribute this to the idea being unique and beautifully executed but who knows.  Ideas have a life and karma of their own.  I called the agent and told him the good news.  “Oh of course, he said, that editor loves yoga.” Go figure.

Like Loading...
Tags: born yogis, doug kim, idea development, proposal, publishing, Read More, rodale press, selling a book, susie arnett, writing a book, yoga, yoga book
From: Uncategorized
← The Yoga of Making Media
Should I stay or should I go? →
No comments yet